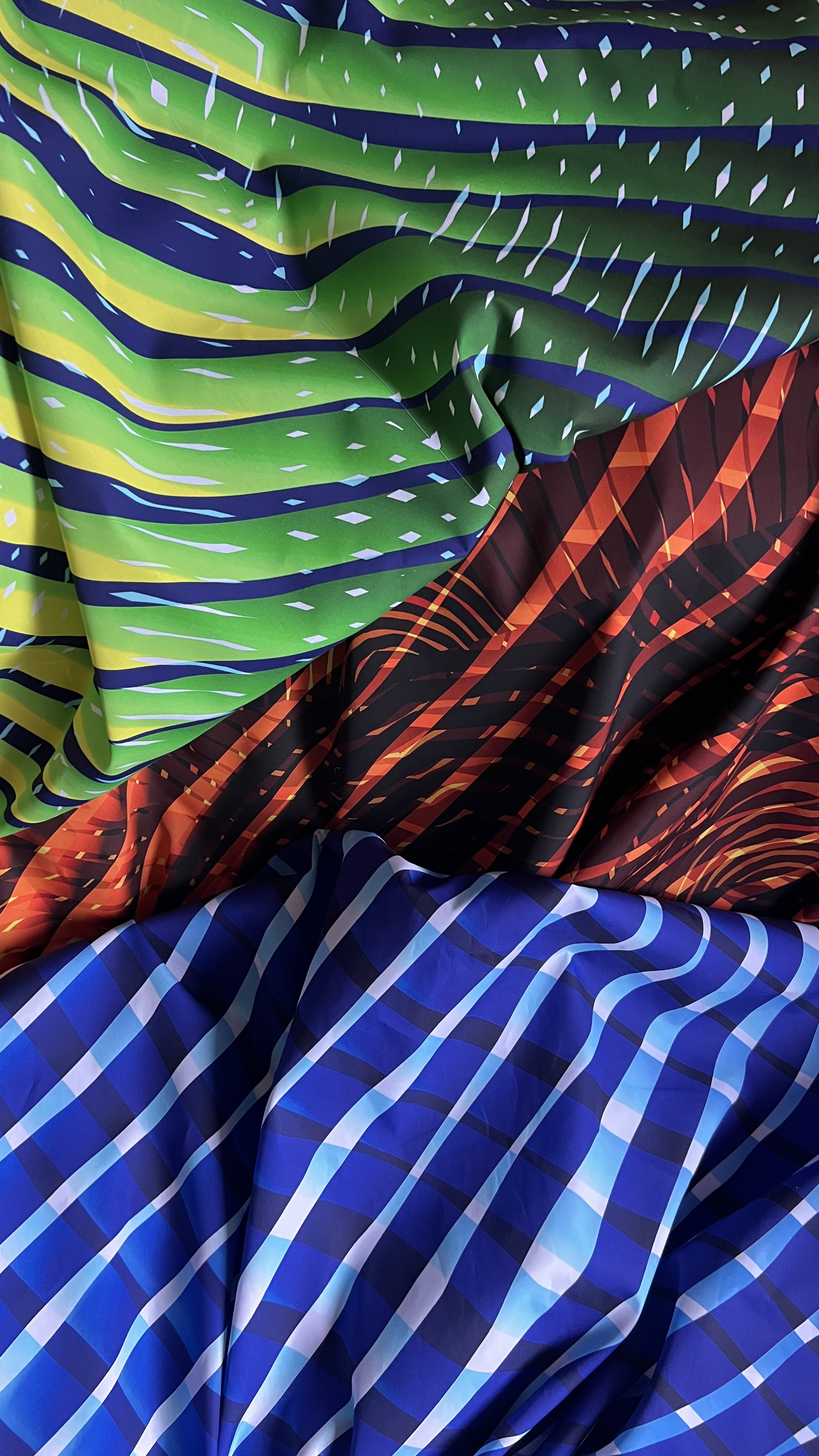 WE: Stories Trinbago explores visual communication design through indigenous and ancestral ways of making. It is the physical manifestation of the theoretical master’s thesis; WE [the MANY] Ting Self.

What if I told you a textile can be a poster or a book? Can a poster provide information without using words? Can a book tell a story using symbols? Within many cultures around the world textiles and symbols have been used to tell stories for generations. What might be considered symbols to the uninformed, often times contain knowledge that has been sustained through time and passed on to those who can understand its meanings.

Colonisation not only affected land but also knowledge creation and dissemination; with regard to aesthetics, many cultures were left devastated. Their means of expression and sensing the world were erased, silenced and in some cases forcefully replaced with the dominant European aesthetic. Moreover, their ways of making and creating i.e. designing, when evaluated through Kant’s theory, non-Eurocentric art and design were negated as folk/traditional art and now a new misnomer vernacular design.

What might be considered symbols to the uninformed, often times contain knowledge that has been sustained through time…

The colonial nature of modern aesthetics created this scale of value in how we think about art from previously colonised places and how we think about design languages today. This value system and way of categorising exclude many societies’ and communities’ indigenous ways of creating and making.

Visual creolisation and WE: Stories

It brings together the subversive aesthetics of présence africaine that survived the brutal process of British colonialism that tried to eradicate it. It is the powerful presence belonging to the excluded majorities which are not solely African. The présence européenne is the way in which we are taught to express our creativity within the norm of western hegemony. Within visual communication design, the European presence is the dominant voice which we are taught. Présence américaine refers to the ‘primal scene’ of violent expropriation and conquest – the continent of ‘America’ as the “New World”. It is the ‘site’ of a tabooed desire, where the scandal of ‘cultural miscegenation’ between these worlds collide and the disruptive force of ‘the local’, the indigenous – the site of the vernacular.

WE: Stories aims to visualize oral stories of cultures sustaining them, making memories tangible in textiles. The reversible textile applies visual creolization as the creative methodology. It features a poster that represents a key principle that can be shared by the community and a book with stories that can be experienced and sustained throughout time.

Together We poster shares the message of unity, diversity and coming together from each corner of the earth to a small twin island Republic of Trinidad and Tobago. It visually represents and echoes the motto of “Together we aspire, together we achieve”.
An Ode to Carnival book gives access to various points of the story of carnival from the European contact with the indigenous peoples of Iere and Tobago to the modern expressions of Mas’.

This project is an ongoing opportunity to work with other designers who are interested in reflecting their oral stories visually. Feel free to reach out for partnering opportunities, and exhibitions or to work together through the concept of visual creolization.